How many times have you been trying to hang a picture on a wall and you want to see if it’s level, but you’re too lazy to go out to the garage or basement and get a level? Well, now you don’t have to because there’s an app for that! There is also an app that you can use if you are trying to lose weight and want to count your calories for the day. If you can’t find your car in a parking lot, there’s an app that will tell you where you parked, and it will read it to you in a pirate voice (for inquiring minds, the name of that app is Carr Matey). The moral of the story here is, there is an app for pretty much everything nowadays, and the home screens on our mobile devices are covered with various apps. 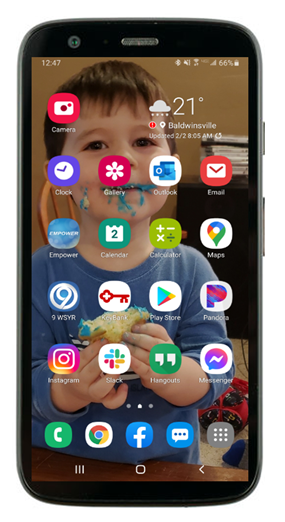 There is no doubt that our phones have become so much more than a device that makes phone calls, sends text messages, or checks email; they have become mini mobile machines. Now you can turn the oven on from your phone while you’re on your way home from work, or remotely start your car from your phone, or use your phone as a scanner and turn a regular document into a PDF because let’s be honest, who still faxes anything these days? We can do all of these life-changing and time saving tasks through apps on our phones. The average US adult spent 25 additional minutes per day on mobile apps in 2020 than the year prior. Twenty-five minutes per day using apps might not sound like a lot, but when you say that adults are spending 152 hours per year on apps, that is the sound of cash registers ringing to businesses. That is a lot of opportunity for businesses to place their ads in front of the audience they want to reach, while they’re using apps to listen to music, play games, chat with friends, and watch videos. 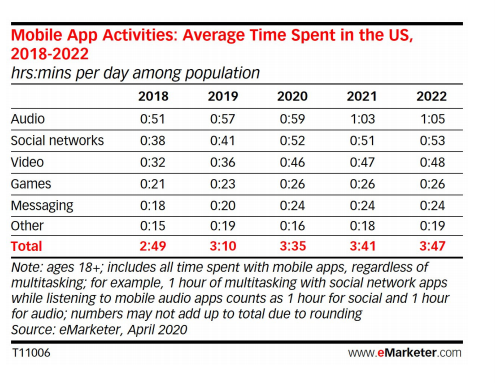 When people think of digital ads, the first thing that might come to mind is seeing an ad for a product or service on a desktop or laptop while they’re browsing the web, or seeing an ad on Facebook while scrolling their News Feed. While those are absolutely digital ads, those same ads can also be seen by users while they are using apps through different digital products. Some of the products that can show ads in apps are:

Amazon– Using Amazon targeting data to reach people with your display, video, or OTT ads on Amazon.com, Amazon owned properties and thousands of other websites and apps Amazon has partnered with, across all devices.

Mobile Conquesting™ Ads– Using location based, demographic, and behavioral targeting to reach consumers with display and video ads on their mobile devices.

Display Ads– Ads that go across all devices, appearing on websites or apps, using targeting strategies.

Native Ads- Display or video ads that go across all devices and match the look, feel and context of the website or app where they are seen, using targeting strategies.

Social Mirror™ Ads– Ads that look like your social media display or video posts but appear on other websites and apps, linking back to the social media platform and your website, and run across all devices using our targeting strategies.

Video Ads– Ads that go across all devices, appearing on websites or apps, using targeting strategies for Pre-Roll and Over-The-Top (OTT) content. 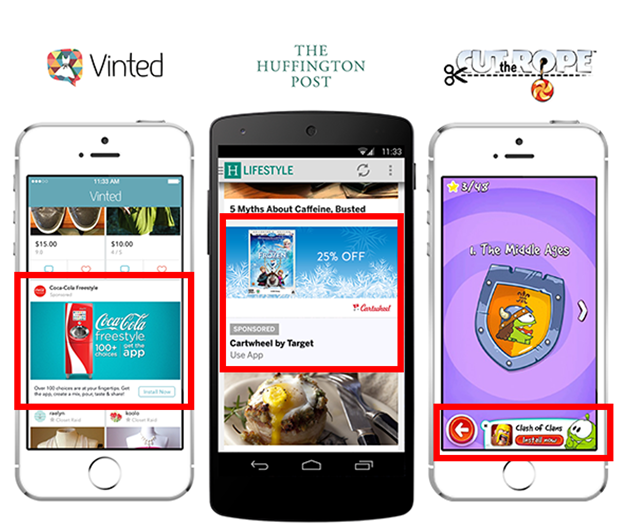 These ads appear between the text conversations on the messenger homepage within the app itself. When someone clicks on an ad, they go to a detailed view within Messenger. From there they’ll see the full ad with a call-to-action button that takes them to the destination on where you wish to land people. 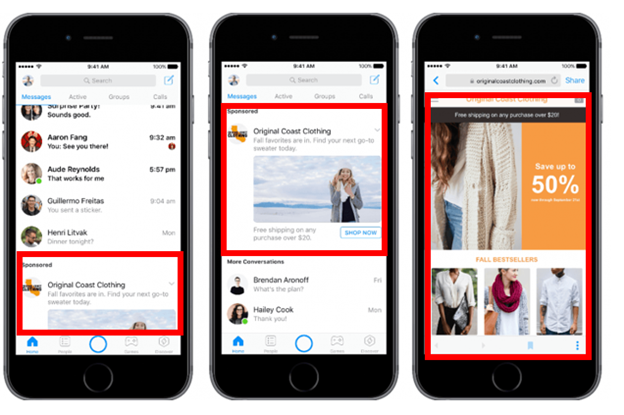 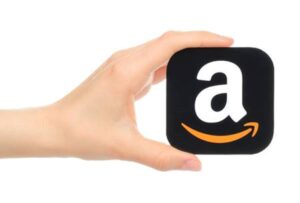 It’s not just that existing users are spending more time in apps, but certain app categories have seen a large increase in users due to the pandemic. Think of your own consumer behavior during the past year or so. I never used the Target app prior to the pandemic, but now, that’s all I use. If I need something from Target (need is a relative term here), I grab my phone, open the app, add items into my cart, select drive up as the pickup option, and I am done. While some of these changes will fade post-pandemic, others will persist, including increased digital video viewing and ecommerce adoption, and these behavioral changes will continue to boost time spent with mobile. This should translate into rapid growth in mobile advertising in the coming years. 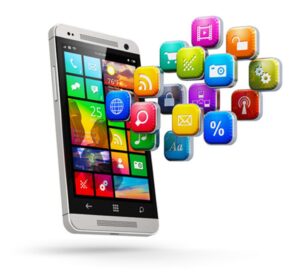 Display, Native, Social Mirror™, and Video Ads are ads that appear across all devices, including smartphones and tablets, so these digital products will also allow for ads to appear within apps that people are using and then see that particular type of ad. In-app usage has increased with the average adult in the U.S. spending 2 hours and 25 minutes a day using mobile apps, which is more than a 10% year-over-year increase. With more people using mobile devices, or having more than one mobile device, that’s causing more apps to be used, which means people are spending more time with apps, resulting in more ad dollars being spent on in-app advertising. 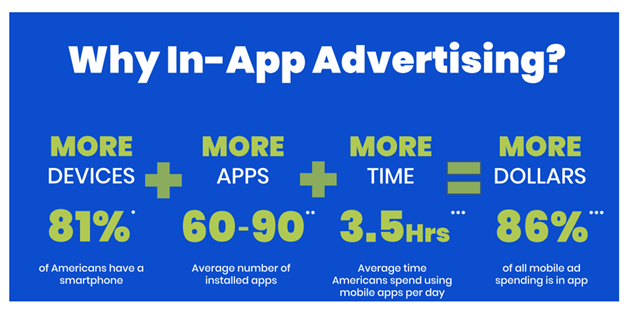 With all the different ways there are to get a message across to consumers, digital advertising allows to target a specific audience that you want to reach, and in multiple ways. As a business owner, if you are seeing that people are spending more time with apps, that is a place that you want to be. When Facebook first started, that was a place that businesses wanted to be because that’s where consumers were spending a lot of time. With the first app being available in 2008, we have had over 10 years for that pool of advertising opportunities to grow. In-app advertising is one of the leading ways for businesses to get their brand in front of consumers, and there are a lot of different ways to do it.

There is no denying that in-app advertising is here to stay and it’s a great place for businesses to take advantage of, but with increased ad spending in apps, is it time for Google Analytics to catch up with the times? We certainly think so because right now, app traffic is very difficult to find in Google Analytics, even with UTM codes. When someone sees the mobile ad inside an app (and most mobile inventory is in apps) and then clicks to the client’s website, the app does not pass the tracking code to Google Analytics, so Google Analytics categorizes it as a bounce since it can’t track that person who comes from an app. Often we see 100% bounce rate, or 0% time spent on site, because the data isn’t being referred properly through a Google Analytics code. The apps goal is to keep them in the app while loading website data within its frame. So with an increase in app usage, it would be interesting to see the “real” data within Google Analytics when it comes to app traffic. 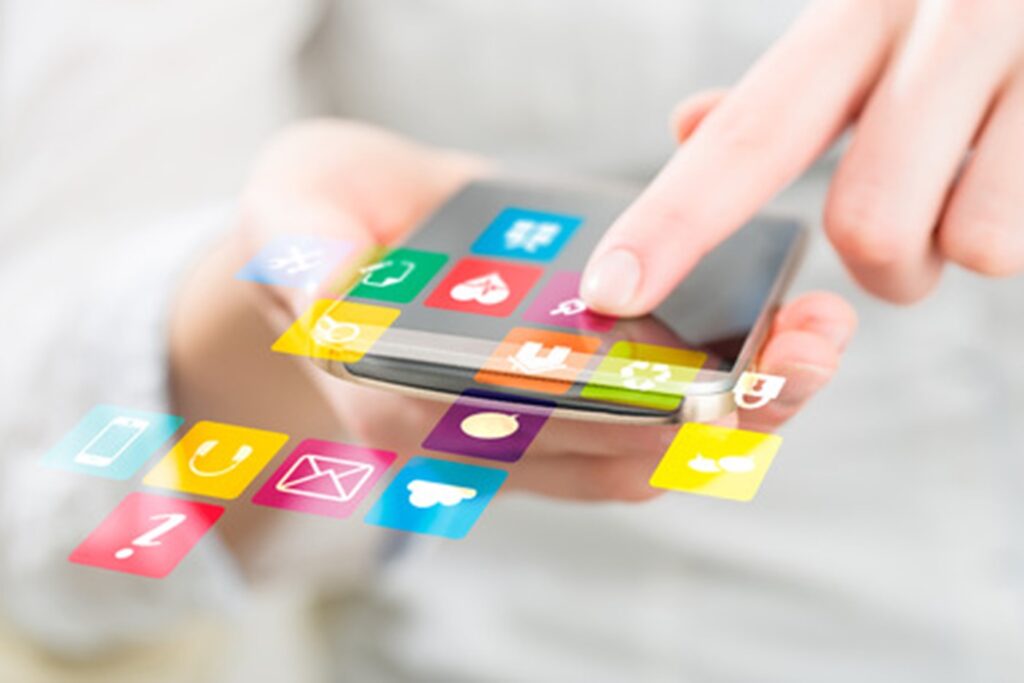 How To Tap Into Local Political Campaign’s Digital Dollars!

According to Borrell Associates “Online political spending in 2016 across local, state, and national campaigns projected to hit $1... read more

Branding Yourself On Linked In with Customizable Backgrounds

What was once only available to premium members of Linked In has now reached the masses: customizable backgrounds, similar... read more

What Digital Advertising Products Should Casinos Use?

With 465 commercial casinos throughout the United States, according to Statista , there’s bound to be one near you,... read more

Call tracking is very beneficial to not only your campaign, but your business as well. It gives you a... read more

The Rules for Political Advertising on Facebook Have Changed

From Russia, with Love? Recently both Facebook and advertisers are scratching their heads on how to handle US political... read more

Is IP Targeting Digital Ads Right For My Business?

Maybe…Maybe not.  How do you know?  First let’s start with what IP Targeting is.  Many digital providers say they do... read more

Could this be the end of coupon mailers and Sunday ads? The year 2015 has shown an immense positive correlation... read more