How Does Amazon Know So Much About You?

How Does Amazon Know So Much About You?

I have always been a pretty neat, clean, and tidy person. I don’t like clutter, I like seeing the lines on the carpet from a vacuum in a room, and everything (and I mean everything) has a place. Well, having kids changes that because now my living room looks like a bomb went off at any given point with the number of Magna-Tiles, Paw Patrol cars, and wooden blocks that are strewn all about. Just the other day as I had stepped on another Tyrannosaurus Rex that I thought, “there’s gotta be a better way to keep all these toys somewhat organized,” so I immediately got onto Amazon and purchased a bunch of mesh zipper pouch bags. I thought they would help keep all my son’s dinosaurs in one pouch, all his cars in another, his blocks in another so that he could still find what he wanted, and my living room would look a little normal. 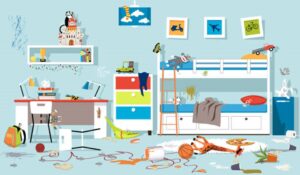 That’s just one example of when I have used Amazon in the past week. I have also bought Halloween costumes, fog juice, ink for my printer, and a smart plug. While I am feverishly making purchases left and right from Amazon to make my life easier, Amazon is gathering all sorts of data about me based on my purchases, searches, interests, behaviors, and more. Amazon is now the second largest data collector on the internet, so all of this data that’s gathered is then used so that businesses, marketers, and advertisers can reach a very detailed, targeted audience. 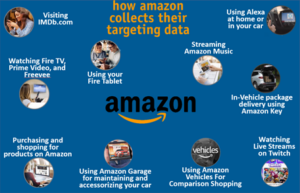 With four different ways to reach Amazon users with ads, businesses have options on how targeted they want to get, and also on what kind of ads they want to serve to users. Through Amazon, you can reach consumers with Behavioral Targeting, Product Targeting, Custom Audience Matching and Lookalike, and Retargeting.

With Behavioral Targeting, you are showing your display, video, or Over the Top (OTT) ads to specific consumers based on what they’ve purchased, browsed, or searched for on Amazon, and then show those ads across Amazon.com (if it’s a display ad), Amazon owned properties and on thousands of partner websites and apps. Through my recent activity on Amazon of what I browsed for and purchased, I put myself in the following categories:

With Product Targeting, we are getting a little more precise because we are building an audience of people who have searched, browsed, or purchased specific products on Amazon, and then showing them a display, video, or OTT ad on Amazon.com (if it’s a display ad), Amazon owned properties, and on thousands of partner websites and apps.

To put those same products into perspective for Product Targeting, maybe Party City is running a campaign and they want to reach moms, so they build an audience of people based off those that have searched for, browsed, or purchased Halloween costumes, party décor (fog juice), or Halloween candy. If Staples was running a campaign wanting to promote their home office equipment, they could start serving me ads if they are looking for people that have searched for, browsed, or purchased office furniture, desk chairs, or printer ink. 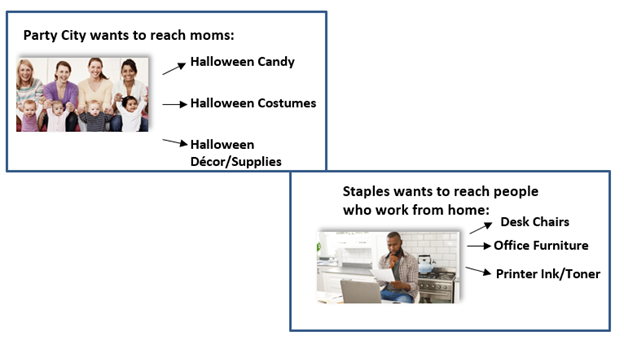 With Custom Audience Matching, Amazon will take a list of email addresses, physical addresses, or phone numbers, match them to Amazon users and show a display, video, or OTT ad across Amazon.com (display only), Amazon owned properties, and on thousands of partner websites and apps. You can also choose to use a lookalike audience which is then finding other people with similar characteristics and behaviors on that original list, and then serve them ads. When you sign up for an Amazon Prime account, you never would have thought that when you signed up for an Amazon account, you were signing yourself up for a whole lot more than Amazon Prime!

As a business owner, it sounds real sexy to think of your ads being on Amazon.com, and sure, that is really neat, but the real power of partnering with Amazon is reaching people with that same targeting data that Amazon has created, but while they are off of Amazon. That’s what is happening when people are seeing ads on Amazon owned properties and on Amazon Publishers. As consumers, we typically go to Amazon.com, search for something, put it in our cart and leave, so we aren’t spending a ton of time on Amazon.com. We are, however, spending time on IMDB.com, Freevee, Twitch, and FireTV, which are all properties owned by Amazon. Additionally, Amazon has partnered with thousands of different websites and apps so that you can be served ads while on various websites and apps that are not affiliated with Amazon, called Amazon Publishers, and these are just a few:

As an ad platform, Amazon is growing at a very rapid pace. Their share of U.S. net digital ad revenue is 10.3%, behind Facebook at 25.2% and Google at 28.9%. Now 10% might not sound like a lot, but Amazon has only been in the advertising game for 10 years. Both Google and Facebook have been around a lot longer than that, so to be that close in 10 years says a lot.

On the consumer side of Amazon, millennials are the biggest audience using Amazon and outpace Baby Boomers by a ratio of two to one when it comes to using Amazon as a shopping tool. That’s not too much of a surprise seeing that at the time of Amazon’s founding, the oldest millennials were only 16 years old, and today millennials are between 25 and 40 years of age and just at the life stage when consumer incomes and spending begin to peak. Boomers, now 57 to 76 years, are going in the opposite direction with income and spending dropping as they reach retirement age. If a business is looking to target Millennials, Amazon is a great place to do that. They are the generation that is utilizing the e-commerce site the most, which is just one of the ways Amazon is gathering that first party data. 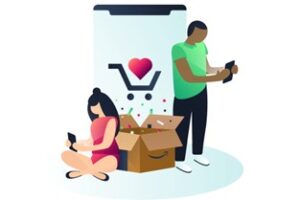 Is Your Business Using All That Amazon Advertising Offers?

Peanut Butter and Jelly. Macaroni and Cheese. Cookies and Milk. Those are things we can all agree on that... read more

How to Use Digital Advertising During the Holiday Season

Historically when it comes to ad buying you have two giants fighting for business ad dollars: Google and Facebook. ... read more

Where should I spend my Digital Advertising dollars in 2023?

As the holidays come into view on the calendar, so do the budget meetings, review meetings, and strategy planning... read more