With March officially over, and with the promise of warmer weather around the corner, it seems like the perfect opportunity to take a step back and look at some interesting stats and info from this past month surrounding digital marketing. First up, a new eMarketer study predicting that digital ad spending will surpass TV ad spending next year.

Digital to Outspend TV in 2017

In their recent study, eMarketer outlines how digital ad spending will surpass TV ad spending next year, by nearly $5 billion dollars. This would bring digital’s share of total ad spending up to about 38%, and drop TV’s to about 35%. By 2020, they predict TV ad spending to drop below 33% for the first time ever in the United States.

In another market share showdown, mobile ad spending has overtaken desktop ad spending for the first time. According to a study released this past month by Marin comparing the allocation of advertising budgets, mobile ads accounted for more than 50% of the $7.8 billion annual spend. It’s not hard to understand this change when mobile devices have become a staple in our everyday lives. Still not convinced of the power of mobile? Let’s look at March Madness. 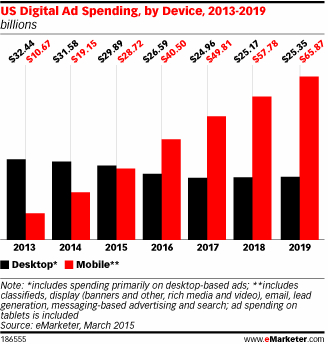 During this past months’ intense college basketball tournament, the use of a “second screen” (your TV being the first) to look up scores, stats, and even sports apparel rose dramatically. According to Google, mobile was the most popular platform for finding out sports related info, as well as sports video playback, with over 3 million hours of March Madness highlights being watched. With nationwide events like March Madness – and even the upcoming Olympic Games – the second screen becomes valuable real estate to those who want to get their brands in front of viewers who are the most likely to engage with it.

Staying up-to-date on digital advertising trends can play a key role in your decision-making process when it comes to how you spend your own advertising budgets. The big takeaways from this roundup? If you haven’t invested in some mobile advertising, than you are falling behind. Mobile is becoming the go-to device for information and entertainment content, providing great opportunities to get your brand in front of the right people. Also, nationwide and global events present advertisers with the ability to put relevant content in front of users at the exact moment they are looking for it. With the Olympic Games coming up, brands should begin creating campaigns which will take advantage of the increased consumption of digital content. To learn about how we can create a great mobile-focused campaign using Mobile Conquesting, click here.

If Your Mobile Site Doesn’t Load in 3 Seconds, Your Customers Aren’t Happy

Ready or not, the holiday season is upon us.  While some of us are already planning on procrastinating holiday... read more

The Omnichannel Experience: Coming to Screens Near You in 2015

The Omnichannel Experience may sound like an action movie you would see in an IMAX theatre, but this concept... read more

In some instances, getting the right message to the right person in the right language is as simple as... read more

Historically when it comes to ad buying you have two giants fighting for business ad dollars: Google and Facebook. ... read more

According to a recent article in eMarketer, digital media continues to surpass traditional media in amount of time spent... read more