Besides political dollars, there are other opportunities to find digital dollars within the government.  This year, the biggest contributor of that is the US Census.  The 2020 Census is the largest collection of statistical information on everyone living in the Unites States and is required by the U.S. Constitution.  The reason why it’s such an important process is because the responses to the Census will shape how more than $675 billion  in federal funding is allocated to local communities.

According to the Census website it looks like over $300 million is going to be spent on marketing initiatives to target people to fill it out.  Looking closer at those numbers, here is a little breakout on projected spend by Media Type:

If you do the math on the digital side of things, it is projected that a total of almost $97 million that will be spent in digital!   Granted, some of that is national, but about 37% of that is going towards local media buys.   That means just over $35 million will be spent on local digital advertising.

If you’re wondering where to get your piece of the Census pie, good news for you!  Since they have extended the deadline of completing the Census through October 31st , there’s a chance that some of those dollars are still available.  If you want one better, here’s a list of agencies that are managing the 2020 Census Paid Media Campaign.

As you prepare to make contact with someone to see what piece of the Census pie you’ll get, here are a couple of tips that some of our partners have already put together:

First, on the west side of the country, there was a campaign put together using Display Ads, the typical online ads you envision seeing when you go to a website.  This campaign specifically was designed to target specific nationalities throughout the metro area of a large city.  Using Artificial Intelligence  and Behavioral Targeting to guide the campaign, several pieces of creative were used to call attention to the history of this nationality and to get them to participate in the Census.

Behavioral Targeting is important because it uses online tracking to follow a user’s web-browsing behavior and compiles that data to determine what ad to display to that user.  The Artificial Intelligence aspect of the campaign was able to use machine learning to target consumers based on who is engaging with the ad.

Together this campaign ran over the course of 4 months.

One of our partners up north ran a campaign for the Census over a 2-month period.  This particular campaign included Mobile Conquesting™ and Native Advertising.

Being in a world where everyone is on their mobile device, this is a great tactic to reach the Adults 18+ that they were shooting for.  They were also targeting people that were spending money in the market such as grocery shoppers, workers, gasoline and oil, along with a few others.  Using Mobile Conquesting™, the census was able to target people directly on their smart phones and tablets.

The best part of this campaign is that it originated with a local Census Committee member who sat under the Director of Economic Development for that particular county.

Looking at a campaign on the east coast, they did a 3-month campaign.  This particular approach used Mobile Conquesting™ as well as 2 new approaches; Social Media and OTT/Video Pre-roll.

Inside Facebook, ads were targeted towards A18+.  These ads ran in Facebook Newsfeed, as well as Facebook Premium.  With the increased usage in social media since COVID-19 began, this was a very smart strategy.  Utilizing all of Facebook’s ad placements within a campaign allows for more reach and for more opportunities for conversions.  Having ads placed within Facebook Messenger, Facebook Instant Articles, Facebook Audience Network, Facebook Marketplace and Facebook Stories can have a much higher impact than in the News Feed alone.

Now, taking a look at the OTT/Video Pre-roll aspect of the campaign, they kept the same target audience of A18+.  Since more than ½ of all American adults are devouring Over The Top (OTT) content, and having access to video, being able to serve ads in the midst of video programming transmitted via the Internet, not on traditional cable or broadcast, is a great opportunity to take some of those allocated TV dollars we spoke about earlier.  With OTT, your ad can be served in content being watched on any type of internet connected device including Roku, Connected TV/SmartTV’s, Fire TV Sticks, XBOX and more!  And, you also get access to thousands of publishers and streaming exchanges like Sling TV, Fubo.TV and channels like Discovery, ESPN, FOX, NBA, CNN, and more!  Again, with so many people at home during this time, this was a great opportunity to capture that audience.

Coming full circle and looking at a Census program down South, we find yet another Social Media Campaign.  This campaign targeted parents.

Another frequent category that spends money in digital is Military Government.  Remember, there are many branches to the military that you can reach out to; US Army, US Marines, US Airforce, US Coastguard, and US Navy.   The best place to start is your local recruitment offices.  These offices are responsible for recruiting in your area.  In some cases, they have their own budget for the local market.  However, in most cases there is typically a regional office that oversees the marketing budget for your specific region.

If you’ve worked with the military in the past for recruitment efforts, then you know that they are targeting the younger demographics.  What we see most often is A18-34.  When it comes to products, you can bet they are using the products that the 18-34 demographic is using too.  Some of these products are YouTube, Facebook & Instagram, and OTT.

With YouTube, having the ability to target your :15 or :30 video commercial to the younger demographic is a key factor in choosing this product.  This age group is constantly watching YouTube for everything. Here are some of the targeting categories that have been used for military recruitment: A18-34; Military; Military History; Air Force; Army; Marines; Navy; High School Graduate; Gyms & Health Clubs; High Intensity Interval Training;  and Fitness.   Depending on which branch of the military you’re speaking with, you may want to edit this a little.

Facebook and Instagram is a great place to target the younger demographic, especially with the Instagram side of social advertising.   There are a few tools within Facebook that give each branch the ability to highlight multiple benefits of joining the military. 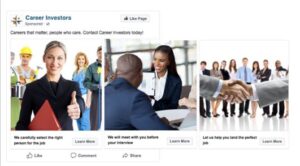 The Carousel Ad does just that.  With up to 10 images and/or videos, many of the benefits can be expressed at once.  Whether they want to promote money for school, degrees that can be earned, the opportunity to fight for our freedom, and anything else that they deem important, the carousel ad gives them the ability to tell their story.

Also, for any recruiting events that they have, they could utilize the Event Response Ad. 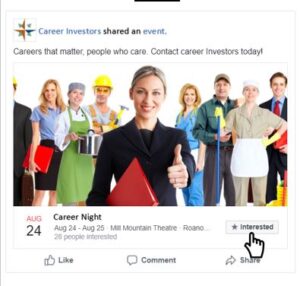 The Event Response Ads link to the branch’s Events Tab on their Facebook page where an interested candidate could find out all of the details.  And, if the user clicks on the “interested” button, they’ll get reminders about the event in their Facebook notifications area.  This is great for any special events that they may have as well.   In regard to targeting, we know that Facebook is one of the best.  Here are some of the available target categories you could use: A17-34, Interests – Army National Guard; Navy; ROTC; United States Air Force; United States Armed Forces; United States Army; United States Coast Guard; Education Level – High School Grad; Some College; Some High School

If you’re looking for more ways to recruit, you can always check out our blog on using digital advertising to for all types of recruitment.

As you can see, there are many ways to find money from the Government, and there are even more opportunities not listed here.  For instance, there are Tourism Departments, Health Departments, and even Community Events. If you’re working with a government department, make sure you ask for referrals.  There are lots of departments that could use digital to promote many different aspects of your city/state.

According to the National Association of Realtors there are 1,384,166 total registered members for the month of January 2020.... read more

Is IP Targeting Digital Ads Right For My Business?

Maybe…Maybe not.  How do you know?  First let’s start with what IP Targeting is.  Many digital providers say they do... read more

What are the Newest Features of a Pay-Per-Click Ad?

There are many names for Pay-Per-Click (PPC) Ads you may have heard; Google Ads, AdWords, and even SEM (Search... read more

What Digital Products work best for Banks and Credit Unions?

Banking.  So many choices to choose from.  Do you go with a private bank or credit union?  Or do... read more

Let’s be honest, how often to you get advertisements through direct mail and how often does that marketing piece... read more