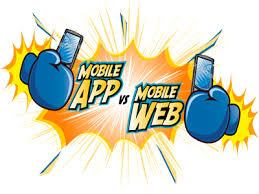 Making an app for your business seems to be what everyone’s doing right now. 2014 was even referred to as the “year of mobile,” however, the roles mobile played in 2014 will be changing in 2015. Mobile is expected to become such a normal part of one’s daily life, it will eventually fade from consumers’ consciousness. The differences between accessing the internet from a tablet, mobile, or desktop will become intertwined. Mobile will soon become the primary way we access the digital market.

So, that seems counterproductive. Why not invest in a mobile app if the future of digital marketing is through mobile access?

Sure, there are plenty of apps that are popular among consumers, but even though they may seem major, they are actually few and far between. A mobile app isn’t the best investment because, for one thing, there isn’t a large audience for apps and market share is scarce. It has been found that the average smartphone user will download 25 apps, but the use of these apps according to Nielsen, has remained relatively the same since 2011 even though there is a constant addition of new apps to the marketplace every day. There’s a ton of competition with apps because there is only so much screen space available.

Another reason an app isn’t the way to go is that apps are an expensive investment, and difficult to promote. The truth is, your website will receive significantly more traffic from search engines and social media than users engaging with an app. In fact, 67% of users say they are more likely to purchase from a mobile website.  In order to reach consumers, a mobile website is a better strategy.

As Google has advanced as a search engine, it has rolled out many features aimed at getting users information... read more

As we know, Facebook has been under scrutiny when it comes to their targeting capabilities and what they can/cannot... read more

It's a fact: Google loves content creators.  And the more credible, keyword rich content on your site, the better... read more

No doubt about it, we are in the social media age.  It is common and almost necessary for businesses... read more

I’m leaving on a jet plane, don’t know when I’ll be back again. (Did you just reread that so... read more

Who starts a company on April Fool’s Day anyways?

Founded on April 1, 2014 who knew what a wild and fun ride it would turn into for these digital... read more

Not every small business has the luxury of having a full-time Marketing Director on payroll, leaving those without a... read more

How To Create Successful Ads For Facebook News Feed

An ad campaign with good copy can still fail if it is partnered with bad ad creative. In order... read more