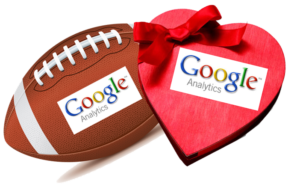 The folks who bring you Google Analytics have just released some first quarter insights from the previous two years that could help you decide when it is best to beef up your marketing in the coming weeks. They analyzed billions of Google Analytics sessions and found that “in particular, the week of February 5th (also known as the week after the Super Bowl and the week before Valentine’s Day) marks the first time that transactions hit the average or above for the quarter.”

In the last two years, the week of February 5th had the highest week-over-week growth in both transactions and conversion rates for the first quarter of the year, at an increase of 6%. Their research also found that, “in both 2013 and 2014, the Sunday before Valentine’s Day sees the biggest spike in week-over-week transactions with an average bump of 10%.”

They also saw that conversion rates had an average increase of 6%, and sessions (visits) having an increase of 4%. In addition to the week-over-week increase, the Sunday before Valentine’s Day also registered a 5% increase in transactions over an average first quarter Sunday, reporting, “The bump in transactions could indicate that consumers are using that Sunday to find and purchase their gifts, making it a good opportunity to invest in getting consumers to your site for some Valentine’s Day shopping.”

To read the full article, check out the Google Analytics Blog.

Video ads keeping getting more popular with advertisers and brands are seeing the value. 85% of brands use video... read more

As reliable as New Year’s Resolutions, so are the articles about 2017 trends.  This year is no exception with... read more

Why Don’t My Click Reports Match My Google Analytics? (Example)

Google Analytics is a terrific platform for understanding more about how visitors use your website.  However, keep in mind... read more

As mobile internet use continue to skyrocket among the large population of digital device users, it becomes more difficult... read more

How to Track Your Conversions on Google Analytics!

So if you read our little cheat sheet on Google Analytics (if not, you can read it here!), we're... read more

The Rise of Location-Targeted Advertising

Adding A User To Your Google Analytics

Granting access to your Google Analytics is quite simple.  You can determine what level of access someone has and... read more