According to a recent article in eMarketer, digital media continues to surpass traditional media in amount of time spent with major media by US adults.  In 2015, the average adult will spend 5 hours and 38 minutes with digital media each day!  To put that growth in perspective, that number was just 3 hours and 40 minutes in 2011.

TV, radio, and print have all seen decreases in time spent with their medium since 2011.  Print (newspaper and magazines) seeing the biggest decreases – magazines are down 13.5% and newspapers down 19.8%.  The average time adults spend with each of these traditional media will decline again in 2015, for the fourth consecutive year. 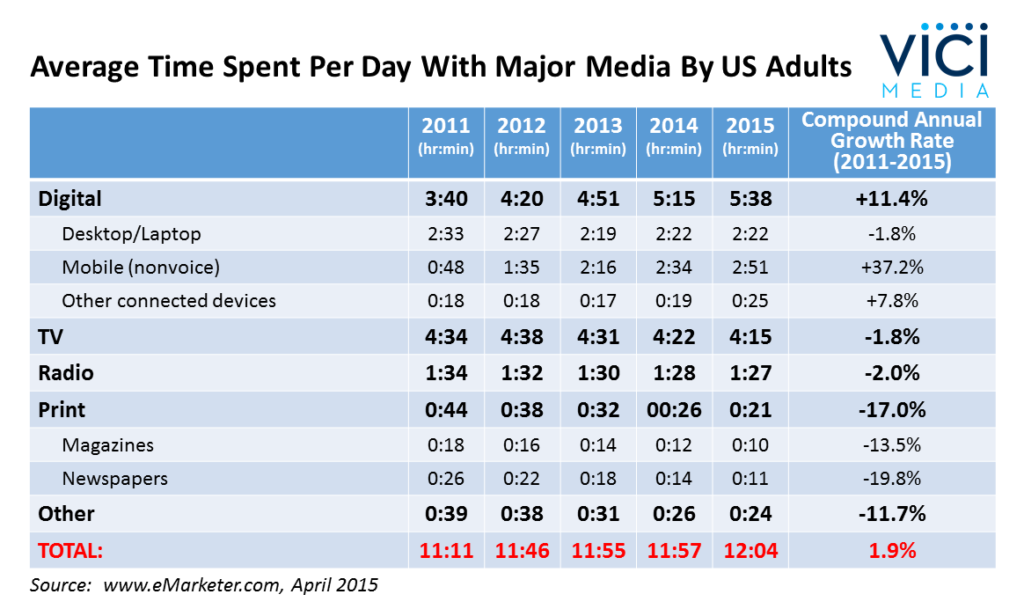 What is Geo-Farming with digital ads? (Example)

You may have heard about a new tactic that’s becoming popular with advertisers seeking to reach people on their... read more

How many times have you been trying to hang a picture on a wall and you want to see... read more

Adding A User To Your Google Analytics

Granting access to your Google Analytics is quite simple.  You can determine what level of access someone has and... read more

Video ad consumption is absolutely on the rise!  A recent study aimed at learning more about consumers’ sentiments regarding... read more

As mobile internet use continue to skyrocket among the large population of digital device users, it becomes more difficult... read more

Scratching your head when it comes to the jargon of online marketing? Well LOL and WTF no more.  Here's... read more

What is Mobile Conquesting™?

Nearly 80% of US adults own a smartphone and we use them a lot. What used to be a... read more

Vici is excited to welcome Megan "Sully" Sullivan and Shay Edwards to the team!  They are both based out... read more