How Are Google And Facebook New Policies Impacting The Running Of Political Ads?

How Are Google And Facebook New Policies Impacting The Running Of Political Ads?

Another step closer to elections, and major exchanges Google and Facebook are flexing their muscles when it comes to the approval process of ads.  Back in June,  Vici reported the sweeping changes on Facebook that required ad buyers to be authorized to run political content.  This requires any individual who is buying a campaign to submit a U.S drivers license, passport, a valid mailing address and the last 4-digits of their social.  The entire approval process of someone not previously authorized by Facebook was around 12 business days, but once you are approved you can manage any political Facebook campaign.  This gave us the ability to manage any political campaign in the country if we were given proper access to the candidate’s or issue’s Facebook or Instagram page.  Within a business day we could be running a social campaign.

Up until last week, Google hadn’t done a lot to mimic the policies that Facebook rolled out, other than responding to local law makers new laws requiring Google to make buyers of political campaigns transparent in Maryland and Washington.  Google responded to these new laws by banning all political advertising in these states.  According to a Google spokesperson, the company values transparency but doesn’t have the tools to comply with these rules as written.

That is until now.  Google recently rolled out a sweeping new policy change for U.S. Politics, stating that every ad buyer on every campaign must get authorized.  Even if an ad buyer was authorized on a different campaign, on Google ad buyers must continually be re-authorized for every campaign they manage.   For example, on Facebook you only get authorized once and you’re free to buy for every other political campaign you run) In the case of Vici, you could have one ad buyer buying 10 campaigns in different states and be required one authorization on Facebook, but 10 authorizations on Google.

To become authorized on Google, you need a Federal Employer Identification number, a W-9, your drivers license or passport, and information about your organization.  While Facebook takes about 12 business days to be authorized, Google has a quicker turn-around time of 3 business days because they aren’t physically mailing you an identification number, however you must continually re-authorize over and over again.

One thing that Facebook and Google do agree on is what needs to be submitted in all political campaigns.  On both platforms it’s important to have a “paid for by” disclaimer to get the ad approved.  Otherwise your ad will not pass the auditing process, further slowing down the launch of your campaign.  Facebook actually shows this data within their ad campaigns, whereas Google does not. 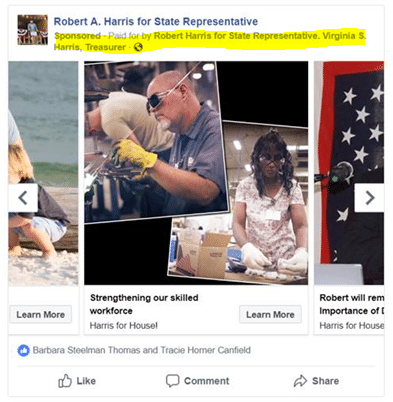 So, what do we take from all this? If you’re running a political campaign expect delays.  At Vici we except the delay only to be up to 3 business days right now, and no delay on Facebook, which is the advantage of working with a preferred vendor.

Voice Search is Here: Is Your Business Ready for It?

When Apple’s Siri first came out back in 2011 the technology was a novelty.  It was cool to test out... read more

What Are Universal IDs Or Unified IDs And What Happens When Cookies Go Away?

Cookies, line of code used to track users across the internet and target ads to them, are going away. ... read more

There are absolutely times in life it is more cost effective to “Do it yourself.”  Before I take... read more

How I Explain SEO & Pay-Per-Click To My Mother

I think Search Engine Optimization is one of the hardest things to understand and even harder to explain to... read more

Are your digital political ads ready to go?

If you are talking to any clients or prospects about running digital ads for political, especially on Facebook or... read more

What is Google My Business and How Can it Help My Online Presence?

Google My Business is an online dashboard that allows business owners to have more control over the information (officially... read more

How To Do A Video Ad Campaign

In today’s fast paced world video is climbing up the marketing ladder, and it is not just for the... read more

In short, the answer is yes!  But, to get a good look at what works and what doesn’t, let’s take... read more

As people, we are able to react to our environment with an array of emotions. Why is it then,... read more